Dont hold your breath for the digital dividend

Last night I heard Duncan McLeod, editor of TechCentral responding to the news that the Minister of Communications, Dina Pule, has withdrawn her appeal to a court ruling for etv in a case related to digital migration. Digital Migration offers lots of potential opportunities: more free to air television channels, more broadcasters, and a 'digital dividend' of freed-up radio spectrum currently taken up by analogue television which could be used for other purposes (bandwidth that mobile operators are particularly keen to gain access to but more on that later). In the course of the interview, Duncan suggested that if no more mistakes were made in getting DTT rolled out, it could start this year and be completed by the end of next year. The Department of Communications has been equally optimistic in predicting the time it will take from launching digital television and beginning delivery of the set top boxes required to watch it and the time that enough of the population will have switched over to enable switching off the current analogue transmitters. So is one to  two years plausible? I think not. 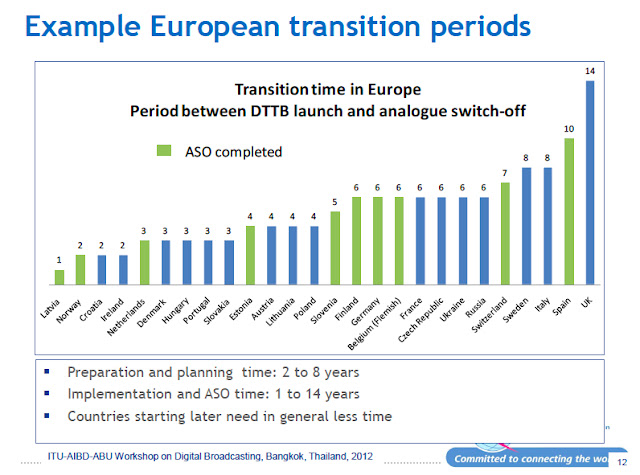 This chart from the International Telecommunications Union gives an indication of why. Only two European countries have succeeded in completing the process in two years. The UK began digital broadcasting the '90s and only finally switched off the last analogue transmitter last year. The ITU says that those starting later have benefitted from learnings of those who came before them but still the average time taken is around five years.

I would argue that as the current framework stands, we are likely to be slower rather than faster than average. The main driver that will determine how long it takes is how quickly audiences shift - getting a set top box and watching digital rather than analogue transmissions. This in turn is likely to depend on what additional content will be on offer on the digital platform.  etv appears to be ready to start new services immediately - it could for example make its 24 hour news channel - currently only available to DSTV subscribers - available on DTT. SABC is another story. When they presented to ICASA some time ago they stated that they would need additional funding from government in order to roll out their plans for new channels - money that has not been forthcoming. Without sufficient new channels and content, take up of set top boxes is likely to be slow.

This is bad news - for television, for mobile and especially for wireless Internet use in South Africa. The frequencies that will become available could be used for next generation mobile services like LTE but they could also be used for unlicenced wireless (like Wifi) services which could greatly expand the opportunities for cheap or free internet services.