Facebook newsfeed: Are the days of 'interrupt and repeat' really over?

This evening I looked at my facebook feed to see how Mark Zuckerberg's new promise 'to give the world the best personalised newspaper' was working out for me. I like the new emphasis on pictures. But maybe its just me but I am seeing more and more prominent 'Suggested Posts'.  Unilever was once a client of mine -  Naill Fitzgerald, the former CEO and Chairman, stated back then that 'the days of interrupt and repeat' were over. Maybe its the experience of looking at the feed on a mobile device but suddenly I'm feeling that my desire to engage with content is being interrupted in exactly the same way as it is on television and radio. 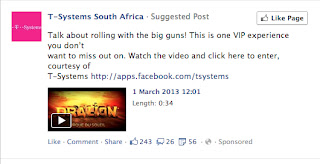 Of course those of us not watching the BBC of an evening are used to this and still manage to still find experiences of value on television. The tech business media has been commenting for a while on the threat to the facebook business model of the move to mobile. The new News Feed to me looks like Facebook is cracking a model for serving significant value for advertisers - not via banners and not via the small text adverts on the web that have worked for google search and (to a lesser extent) for FB on PCs. By improving the News Feed, FB is now creating a flow - parallel to radio and television - and thus creating the opportunity for advertisers to interrupt it. So maybe he's not creating a personalised newspaper but a personalised television channel. Whether this works depends of course on us - the user community. I think I hope it fails if only because I preferred Naill Fitzgerald's prognosis that those days really were over.
Posted by Unknown at Thursday, March 07, 2013